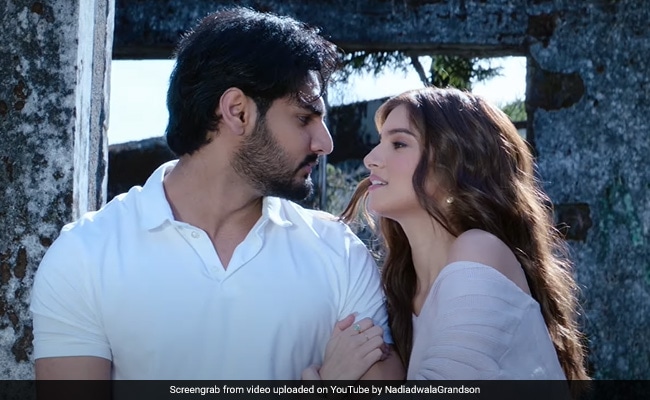 Tadap Trailer: Ahan Shetty and Tara Sutaria in a still from the film. (Image courtesy: YouTube)

The much-awaited trailer of Ahan Shetty and Tara Sutaria’s Tadap finally released on Wednesday and it promises a “tale of raging love.” Amitabh Bachchan, Kamal Haasan, Mohanlal and Chiranjeevi, among other celebs, presented the trailer of Tadap on Wednesday afternoon. It marks Suniel Shetty’s son Ahan’s acting debut. The film, directed by Milan Luthria and produced by Fox Star Studios and Nadiadwala Grandson Entertainment Production, shows the story of “star-crossed lovers” Ramisa (Tara Sutaria) and Ishana (Ahan Shetty). The duo set the screen on fire with their raw, passionate love, which soon turns into “raging love” when their relationship gets hit by an unexpected storm.

The trailer shows Ishana, whose day starts and ends with fights, meeting Ramisa in Mussoorie and soon after, they fall madly in love with each other. Ramisa was just beginning to change Ishana’s violent world with her love when get separated and Ishana returns to his old life. Full of rage, he pledges to take revenge and what follows next is a series of action-packed sequences with glimpses of Ramisa and Ishana’s romance.

Sharing the trailer on social media, the makers wrote: “A tale of raging love comes to life today!”

Watch the trailer of Tadap here:

Ahan Shetty is excited about his debut film. Sharing the trailer on Instagram, he wrote: “My first trailer. Crazy to think the day is almost here. #Tadap, a film I can’t wait any longer to share. A glimpse for December 3rd.”

Suniel Shetty was his son’s biggest cheerleader. “Yesterday – a piece of my heart. Today I share all of it. For you to accept and love. My son #AhanShetty’s #Tadaptrailer launches today. Humbly ask you to embrace him like you did me. Love you #Ahan,” he wrote in an Instagram post.

Amitabh Bachchan presented the trailer and tweeted: “Ahan .. we saw you grow up .. and today it’s a huge pleasure and honour to introduce you to the World of cinema, through your maiden effort ‘Tadap’ .. all the blessings and good wishes.”

T 4076 – Ahan .. we saw you grow up .. and today its a huge pleasure and honour to introduce you to the World of cinema, through your maiden effort ‘Tadap’ .. all the blessings and good wishes .. #SajidNadiadwala#TadapTrailer#Tadap#FoxStarStudiospic.twitter.com/xvf6kWlmSc

Tadap is a Hindi remake of Ajay Bhupathi’s 2018 Telugu film RX 100, which featured Kartikeya Gummakonda and Payal Rajput as the lead actors. The remake will release on December 3 this year.