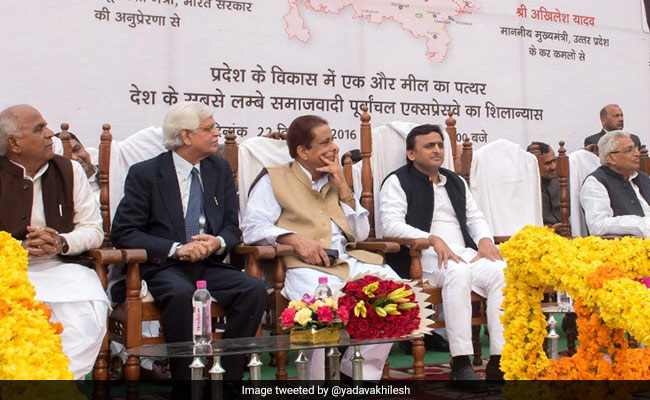 Akhilesh Yadav said foundation stone of the expressway was laid during his tenure.

During a press conference earlier in the day, Akhilesh Yadav said the foundation stone of the expressway, which is scheduled to be inaugurated by Prime Minister Narendra Modi in Sultanpur on Tuesday, was laid during his government.

Taking a swipe at the SP chief, the BJP’s Uttar Pradesh unit said Mr Yadav would next take credit for building the Ram temple at Ayodhya.

In a tweet in Hindi on its official handle, the UP BJP said, “The manner in which Akhilesh Yadav is beating the drum of kagazi (on paper only) expressway, his next tweet will be that ”Ram temple has also been built by the Samajwadi Party government.”

“A picture from the pages of history when the Socialists had laid the foundation stone of the way to the modern future of Purvanchal,” he later tweeted in Hindi and declared the future belongs to his party and “there will be a change in 2022”.

He shared a picture of the foundation laying ceremony of the expressway when he was the chief minister with senior Samajwadi Party leaders on the dais.

On Tuesday, the Prime Minister is scheduled to inaugurate the Purvanchal Expressway which is over 340 kilometre long. It starts from village Chandsarai in Lucknow and ends at village Haidaria located on National Highway 31 in Ghazipur (18 km from UP-Bihar border).

It is a six-lane expressway which can be expanded to 8 lanes in the future.