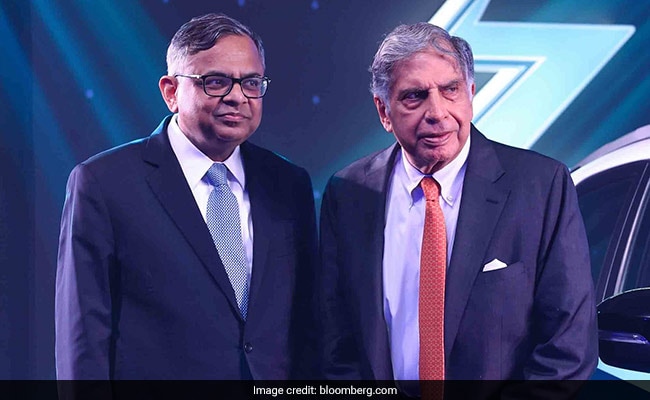 The current chairman of Tata Sons, Natarajan Chandrasekaran, is being considered for extension.

Under the plan being proposed, the CEO will guide the sprawling businesses of the 153-year-old Tata empire, while the chairman will oversee the chief executive on behalf of shareholders, the people said, asking not to be identified discussing private information. The approval of Ratan Tata — the octogenarian chairman of controlling owner Tata Trusts — is seen as key to implementing the change, they said.

The current chairman of Tata Sons, Natarajan Chandrasekaran, is being considered for extension after his term ends in February, while heads of various Tata group firms, including Tata Steel Ltd., are being evaluated for the CEO position, the people said. No final decision has been reached, and the plan and details could still change, the people said. A spokeswoman for Tata Sons declined to comment. Emails to Tata Trusts and Ratan Tata weren’t answered.

The proposal comes months after Tata Sons’ former chairman Ratan Tata, 83, won a years-long legal battle with his successor Cyrus P. Mistry, who alleged mismanagement at the group and sued the patriarch for ousting him in 2016. The proposed makeover may help chart a future for the conglomerate, which is at a crossroads after more than two decades of expansion under Ratan Tata’s leadership. There’s no clarity on who will succeed him as chairman of Tata Trusts, which owns 66% of the holding company that runs the empire whose roots date back to 1868.

Shares of most of the listed companies of the Tata Group advanced following the report. Tata Consultancy Services Ltd., climbed as much as 1.3%, while Tata Motors Ltd. added as much as 2% on Tuesday, when the benchmark index of stocks was largely flat.

A new group CEO will have to tackle many challenges. Tata Steel is racing to cut a net debt load of $10 billion, while Tata Motors — owner of iconic British marque Jaguar Land Rover — has had three consecutive years of losses through March 2021. The group’s plan to move further into the digital space and capitalize on India’s growing base of online shoppers has also yet to bear fruit. Despite having Tata Consultancy Services Ltd., Asia’s largest software services provider, at its disposal, a plan to launch an all-in-one e-commerce superapp to market its swathe of consumer products and services has been delayed.

With 100-odd businesses and more than two dozen listed firms, the Tata group had a combined annual revenue of $106 billion in 2020. Its 750,000 employees make cars and trucks, blend tea, forge steel, sell insurance, write software, operate phone networks and package salt, among much else.

The proposed leadership overhaul is also in line with a recommendation by India’s market regulator that the nation’s top 500 listed companies have a separate chairman and CEO by April 2022 for better governance, the people said. Though Tata Sons isn’t listed, the change would help comply with the rule, the people said.

The addition of a professional manager atop the holding company also shines a spotlight on how Ratan Tata — who continues to shape the group — might envision his own transition from his current role of semi-retired chairman-emeritus.

Though Ratan Tata says he is no longer actively involved in business decisions, he still wields considerable influence over the group’s management through his leadership of Tata Trusts. After an Indian newspaper reported in July that Chandrasekaran’s extension as chairman had been “informally ratified,” Ratan Tata issued a statement saying the board hadn’t made a decision and no one approached him on the topic, reinforcing his clout.

Despite the familial link, Ratan Tata’s sway over the group also stems from his record as Tata Sons’ chairman between 1991 and 2012. A legendary figure of Indian business, he put the Tata group on the global map with a string of eye-catching deals over the past two decades, from the $2.3 billion purchase of automaker JLR to the $13 billion acquisition of British steel company Corus Group Plc.

(Updates with company share prices in the fifth paragraph)
–With assistance from P R Sanjai.