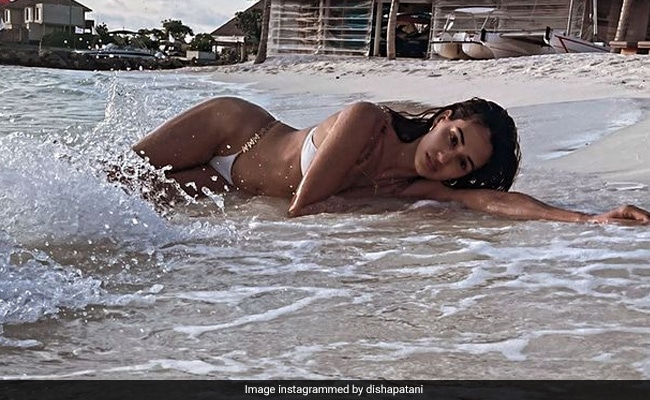 Hey there, Disha Patani. We love your latest Instagram entry. The actress, on Wednesday, set the Internet ablaze by sharing a stunning picture of herself from her beach vacation. She can be seen sporting a white bikini in the picture and chilling on the beach. It appears that the photo is from Disha Patani’s last trip to the Maldives. She had flown to the beach destination with her rumoured boyfriend, actor Tiger Shroff, a few months ago. In the comments section of Disha Patani’s post, her fans dropped red heart and fire icons for her.

Disha Patani has always been a beach bum and these posts from her Instagram feed will show you why:

Disha Patani made her acting debut with the 2015 Telugu film Loafer, in which she co-starred with Varun Tej. She ventured into Bollywood with Neeraj Pandey’s 2016 sports biopic M.S. Dhoni: The Untold Story, in which she worked alongside late actor Sushant Singh Rajput and Kiara Advani.

Disha went on to feature in films like Baaghi 2, Bharat and Malang. She has also appeared in 2017’s Chinese film Kung Fu Yoga alongside Jackie Chan.

Disha Patani’s last film was Salman Khan’s Radhe: Your Most Wanted Bhai. The film opened to poor reviews last month. In his review for NDTV, film critic Saibal Chatterjee gave Radhe 2 stars and wrote: “Radhe has enough inducements for diehard Salman Khan fans to keep them interested in the goings-on. The star does everything that they would expect of him, including shedding his shirt.”