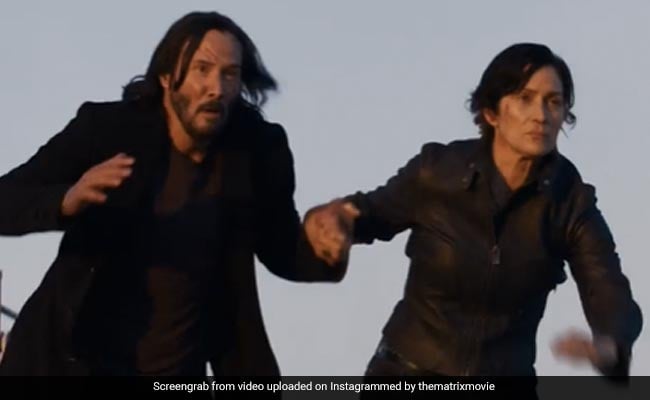 Need to jump off a 46-storey building for an action sequence? No worries. Keanu Reeves and Carrie-Anne Moss have got it. The 57-year-old actor, while promoting his upcoming film The Matrix Resurrections on The Late Show With Stephen Colbert, revealed that he and his co-star Carrie-Anne Moss, 54, had to jump off a 46-storey building at least 19 times (yes, you read it right) to make a specific sequence from the film look real. Keanu Reeves, just like Tom Cruise, is known for performing most of his stunts by himself – John Wick films are proof. On The Late Show With Stephen Colbert, Keanu Reeves, who reprises his role as Neo in The Matrix Resurrections, was asked about the “craziest thing” he had to do while filming the fourth instalment in the Matrix franchise.

“Jump off a building… I’m going to guess around 46 stories,” the actor said and went on to explain why he, Carrie-Anne Moss and the filmmakers didn’t resort to post-production VFX: “Because it’s Lana Wachowski and it’s ‘The Matrix’ and you need natural light and you want to do it real. I mean, there’s wires. Carrie-Anne and I grabbed hands and leapt off the building.”

When asked about how many times did he and Carrie-Anne Moss jump off the building, Keanu Reeves said: “We wanted to do it in the perfect light in the morning, so we did it around 19, 20 times.”

Resurrections is the fourth film in the Matrix series and the first since 2003’s The Matrix Revolutions. The film reunites lead actors Keanu Reeves and Carrie-Anne Moss and director Lana Wachowski. The Matrix Resurrections also stars Priyanka Chopra as a character named Sati.

Coming back to Keanu Reeves and Carrie-Anne Moss’ jaw-dropping stunt, the actor said that while he and his co-star had prepared for the stunt “mentally,” when they actually performed the stunt for the first time, his “heart rate was a little raised.” He added: “But after the first time, you can’t think of the fear. You have to deal with it, absorb it, and just be there, and do. And that’s what we did.”

Keanu Reeves, who has “never” bungee-jumped, summed up his experience of jumping off a 46-storey building on The Late Show With Stephen Colbert like this: “It was awesome. Can you imagine just leaping off a building with wires?”

Meanwhile, in case you are wondering about the aforementioned action sequence, watch it here:

Directed by Lana Wachowski, the movie is scheduled to release in theatres on December 22.