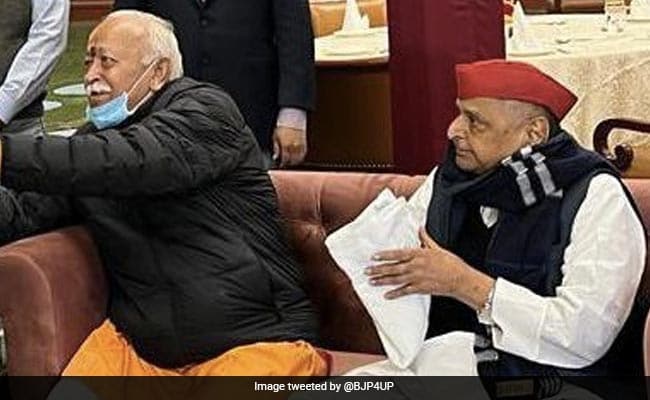 SP’s Mulayam Singh Yadav and the RSS chief were seen sitting together at a wedding reception.

A photo of Samajwadi Party veteran Mulayam Singh Yadav with Mohan Bhagwat, the chief of the BJP’s ideological mentor Rashtriya Swayamsevak Sangh (RSS), has stirred a new row in the middle of the Uttar Pradesh election campaign.

Mulayam Singh and the RSS chief were seen sitting together in a photo tweeted by Union Minister Arjun Meghwal, who had sought Mohan Bhagwat’s blessings on his birthday.

Hours later, the Congress shot off a tweet taking aim at the Samajwadi Party.

“Is the S in the ‘new SP’ meant to be Sanghawad,” the Uttar Pradesh Congress sneered in its post in Hindi.

Then came a post from the BJP in Uttar Pradesh.

“A picture says a lot,” said the post, also in Hindi.

Though the reception featured many big guests, including Prime Minister Narendra Modi and Chief Justice of India NV Ramana, that one image drew much traction in the midst of the high-voltage campaign for the UP election early next year.

As the state’s ruling BJP campaigns to retain power, it faces a tough challenge this time from Samajwadi leader Akhilesh Yadav. Allegations have been flying between the two sides.

Stung by the Congress tweet, a furious Samajwadi Party did not hold back.

“The Congress has put up a photo from an event where leaders of its ally NCP (Nationalist Congress Party) also sought Netaji’s (Mulayam Singh) blessing. What does the Congress have to say to this?” the Samajwadi Party replied on the Congress tweet.

“I have said this time and again that as elections approach, all this starts happening. Abhi toh Income Tax department aaya hai, Enforcement Directorate aayega, CBI aayega (Right now, now the tax department has come… the Enforcement Directorate will come, CBI will come) but the cycle (the Samajwadi Party’s poll symbol) will not stop… we will continue at the same pace … the BJP will be wiped out of UP,” Akhilesh Yadav told reporters.