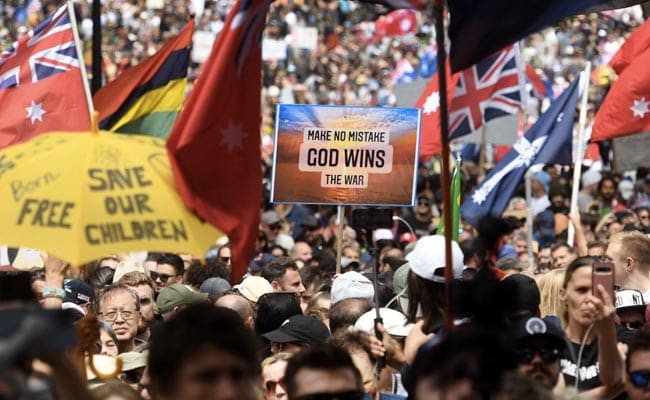 In Melbourne, a crowd of several thousand called for state leader Daniel Andrews to be jailed.

Australia’s vaccine program remains voluntary and highly successful, with nearly 85 percent of the population over 16 fully vaccinated and life returning to relative normality for those double-jabbed.

But protesters rallied Saturday across several of Australia’s major cities against vaccine mandates, which are not universal and have only been applied to certain occupations by state authorities.

In Melbourne, a crowd of several thousand called for state leader Daniel Andrews to be jailed and voiced anger over controversial new proposed pandemic powers.

Police said up to 10,000 gathered in Sydney, where one protester dressed as Scottish freedom fighter William Wallace from the film “Braveheart” and another spoke to the crowd in costume as former US President Donald Trump.

There were no reports of clashes, nor was there any sign of the gallows or calls to hang political leaders which had been filmed at earlier Melbourne protests — sparking concerns the rallies were encouraging violence.

Although the views of the crowd in Sydney were wide-ranging, a heavy presence of anti-vaccination and shadowy conspiratorial views were promoted by speakers and on many signs.

Kelly, who is a crossbench MP in Canberra, has routinely promoted misinformation and conspiracy theories throughout the pandemic.

Around 2,000 protesters also gathered in Melbourne to oppose the anti-vaccination rally — one of the first counter-demonstrations since the pandemic began.

“I’m here because I am disgusted by what’s going on the streets of my city, Melbourne,” counter-protester Maureen Hill told AFP, referring to the anti-vaccination march.

“Everything that’s been done (by the public health orders) has been done to save lives. I mean, it did upset people, and it did affect a lot of people, but it’s a worldwide pandemic. What else are we supposed to do?” Hill said.

Australia has recorded over 195,000 cases and 1,933 deaths linked to the virus in a population of over 25 million since the pandemic began.