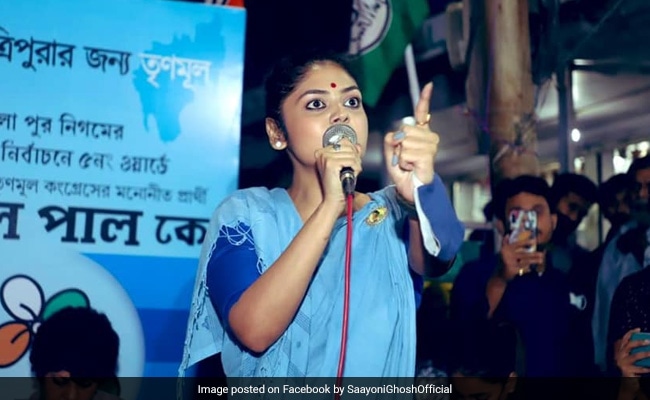 Trinamool Congress leader and Bengali actor Saayoni Ghosh has been arrested by Tripura Police and allegedly attacked by “BJP goons”. Senior party leader and Chief Minister Mamata Banerjee’s nephew, Abhishek Banerjee, will visit the state to stand with the workers”, the Trinamool Congress said. The BJP has denied the allegations and claimed that she disturbed a street corner meeting of Chief Minister Biplab Kumar Deb on Saturday night, reported news agency Press Trust of India.

The police said some unidentified miscreants attacked a group of people who gathered near the police station during the questioning of Ms Ghosh, but no one was injured.

Later in the afternoon, she was arrested, accused of attempt to murder and creating enemies between people among other charges. The sections are non-bailable and she could not be produced in court, the party said.

.@BjpBiplab has become so UNABASHEDLY BRAZEN that now even SUPREME COURT ORDERS DOESN’T SEEM TO BOTHER HIM.

He has repeatedly sent goons to attack our supporters & our female candidates instead of ensuring their safety! DEMOCRACY BEING MOCKED under @BJP4Tripura. #NotMyINDIApic.twitter.com/E9JA4HgTf9

The Supreme Court had recently directed the Tripura Police to ensure that no political party is prevented from exercising their rights.

There have been reports of a series of violent incidents in Tripura as the Trinamool Congress is trying to gain foothold in the state ahead of the 2023 assembly elections. The party is contesting the Tripura civic polls, due on November 25.

The ruling BJP has already won 112 out of 334 seats uncontested across 20 urban local bodies, including Agartala Municipal Corporation. This will be the first civic election that the BJP will face after coming to power in 2018.