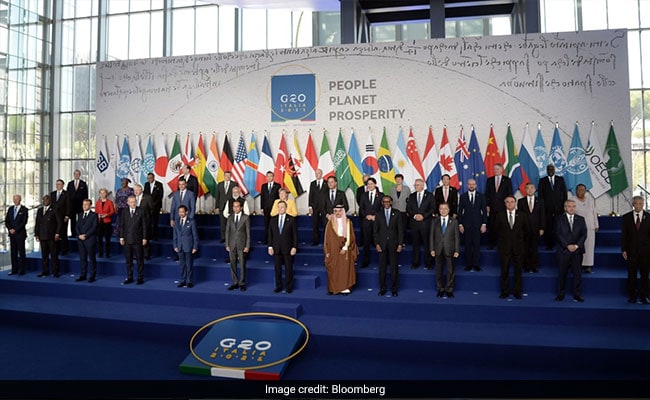 World leaders during the official family photo session at the G-20 summit in Rome, Italy.

Climate negotiators at the COP26 summit were banking on the world’s most powerful leaders to give them a boost before they embark on two weeks of fraught discussions over who should do what to slow the rise in global temperatures.

In the broadest sense, they got what they needed – any consensus was better than acrimonious breakdown. Politicians promised to stop financing overseas coal plants, tackle methane leaks and take greater action this decade to limit global warming. But they failed to agree on a precise date for phasing out the dirtiest fossil fuel and reaching net-zero emissions.

The reaction in Glasgow was one of disappointment. While the G-20 was essentially a discussion between the world’s biggest polluters – responsible for 80% of global emissions – the COP talks bring together almost 200 countries, including those who contribute far less to climate change but stand to suffer greatly from its impact.

“This is a welcome start, but it won’t stop the climate from heating more than 1.5 degrees,” said Mohammed Nasheed, former president of Maldives who serves as the ambassador of climate vulnerable countries, referring to the Paris Agreement’s stretch goal of keeping temperatures from rising more than 1.5° Celsius from pre-industrial levels. “This isn’t nearly enough,” he said.

The watered down communique will it make harder to achieve consensus among the hundreds of diplomats gathered in Scotland. Countries agree on the broad framework that underpins the talks, famously decided in Paris in 2015, that every nation pledges to do as much as they can to cut emissions, while rich nations provide financial support to help developing economies raise their ambition.

The reality is much more complicated. For example, G-20 leaders agreed in Rome that they would channel post-Covid stimulus money into climate action and use development banks to mobilize more funds for developing countries. That’s what the delegations for India and Indonesia told Bloomberg would be needed for them to phase out coal. But the G-20 statement dodged the real issue: there weren’t any concrete details on sums that may be spent or the date by which they could be secured.

Or, take methane. G-20 countries agreed that stemming releases of the superwarming greenhouse gas is one of the cheapest, quickest and most feasible ways to cool the planet. But they fell short of agreeing to the Global Methane Pledge that aims to reduce emissions by 30% by 2030 relative to 2020 levels.

“This weak statement from the G-20 is what happens when developing countries who are bearing the full force of the climate crisis are shut out of the room,” Mohamed Adow, director of Power Shift Africa, a non-governmental organization. “At least the UN process is open to all countries and allows the voice of the climate vulnerable to be heard. The exclusive club of the G-20 is clearly not fit for purpose.”

G-20 leaders reiterated the Paris accord’s temperature goals, though they narrowed the timeline for getting to net-zero emissions. In the Paris document, countries agreed to try and reach the milestone by the “second half of this century,” but over the weekend the G-20 agreed to reach carbon neutrality “by or around mid-century.” An earlier draft of the communique had proposed a 2050 date; countries including Russia and China have recently set a 2060 target.

Speaking on the opening day of the talks, COP26 President Alok Sharma said the G-20 talks had not been easy, but warned that “one meeting – be it the G-20 or COP26 – isn’t going to be able to address everything.” He said it showed the need to accelerate climate action this decade. That will mean making progress at on the details and hammering out specific targets that hold countries to account.

“In many ways, success at the Glasgow climate talks hinges on rebuilding trust,” said Helen Mountford, vice president of climate and economics at the World Resources Institute, “trust that the promised financial support will be delivered to developing countries, trust that major emitters will make bold emission cuts and trust that new corporate commitments are transformative rather than PR stunts.”