Most opinion polls forecast that the BJP is going to win by a clear and convincing margin in Uttar Pradesh, although, on average, the BJP is forecast to win about 100 seats fewer than in the 2017 landslide. However, if the mood of the voters in these assembly elections is the same as in the recent UP Panchayat elections, this is unlikely to be an overwhelmingly clear victory for the BJP as the exit polls suggest.

Here are the highlights of ‘Battleground Uttar Pradesh’ With Prannoy Roy:

Prannoy Roy: Most opinion polls forecast that the BJP is going to win by a clear and convincing margin, although, on average, the BJP is forecast to win about 100 seats fewer than in the 2017 landslide. But opinion polls can be wrong. How can we rely on opinion polls when the record of polls in the recent West Bengal election, held in May, was not that good – with the consensus being of a close fight with a slight edge for the BJP. 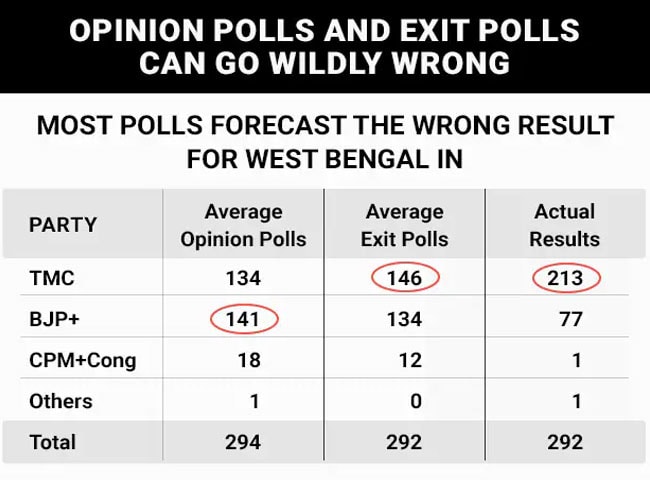 Prannoy Roy: Despite the enormous swing needed for the BJP to lose this election, there is concern within the BJP that swings of this magnitude are not uncommon in UP. 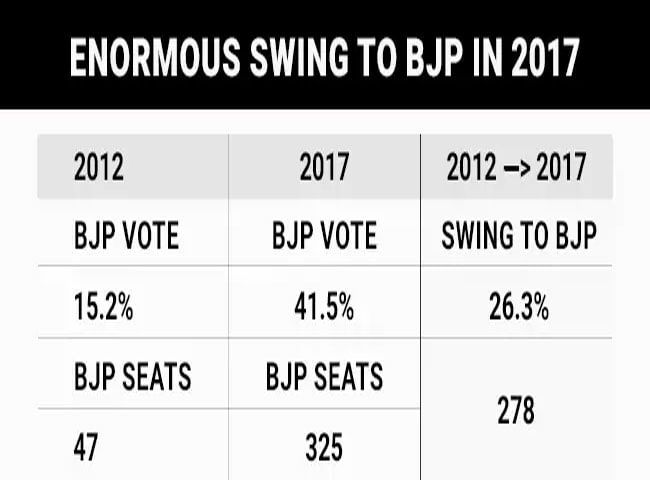 Uttar Pradesh: 5 Elections In 25 Years And 5 Changes In Governments 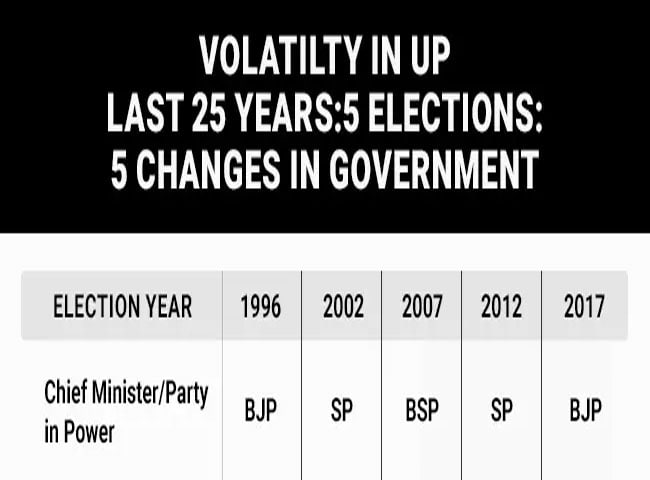 Male Voter Turnout Much Lower In East UP

Prannoy Roy: More women are voting than men and they crucial factor for this women. It is very difficult for pollsters to question women. In east UP, male voter turnout has plummeted. 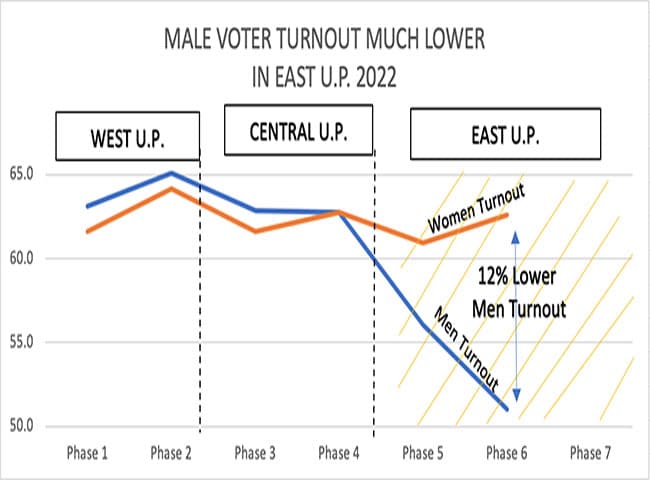 Male Voter Turnout Much Lower In East UP In 2017 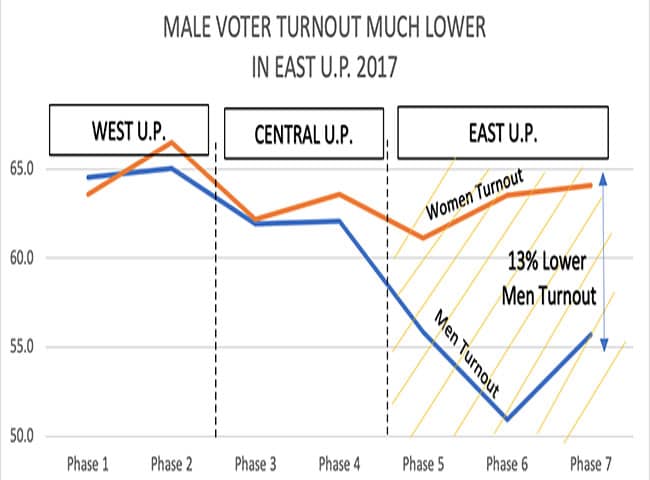 UP: Impact of Index of Opposition Unity vs Swing 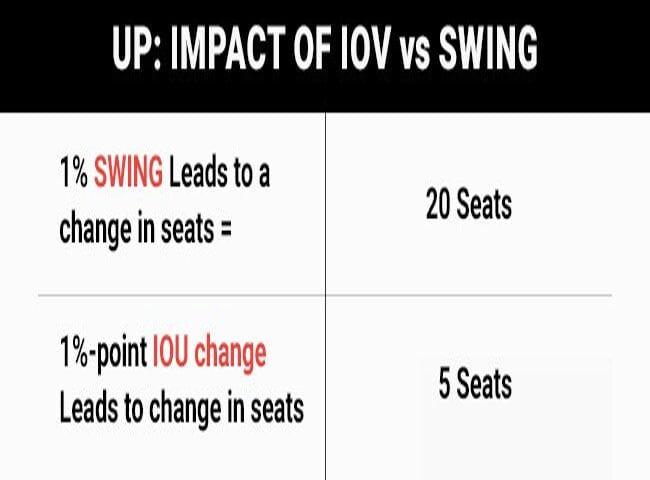 If the IOU doesn’t rise, the BJP can afford to lose as much as 7.5% of its vote (i.e. a swing that causes a drop from its current 42% to 34.5%), which is not impossible in a volatile state like UP, but most experts consider this very unlikely. In reality, the final outcome is always a combination of both a change in the IOU as well as a swing in votes. 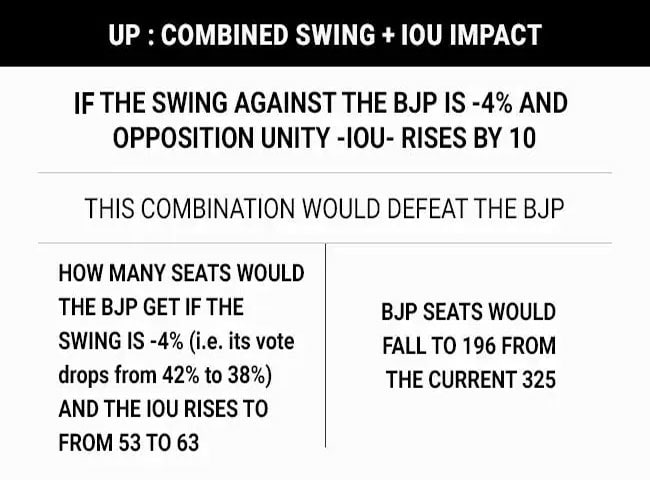 UP Election: Caste Matters – But Nowhere Near As Much As Believed

The default observation of many political commentators is that every vote in UP is determined by the caste of the voter.

This is often taken to the extreme opinion that 90+% of Yadavs vote for the Samajwadi Party.

How Much Does Religion, Caste & Rural-Urban Affect BJP Vote

Prannoy Roy: The reality is that the maximum variation of any party in any category of seats is only 4-5 percent above or below the party’s overall average.

Vandita Mishra, The Indian Express: In Yogi raj, the local police stations have been freed from local heavyweights. This is the most nakedly Hindu election I have seen. 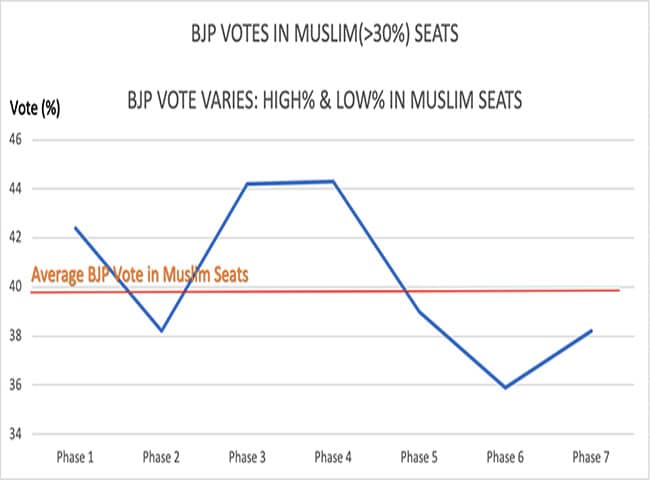 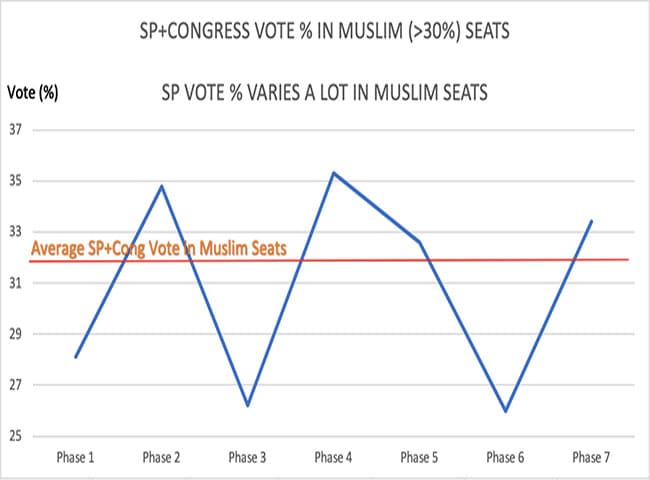 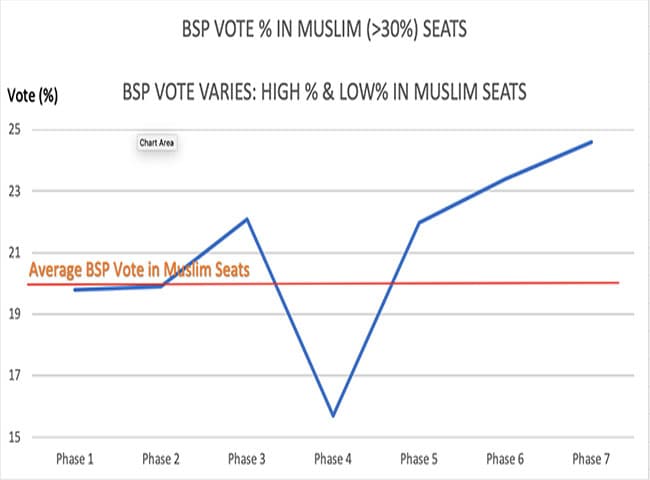 The Non-Caste Economic Factor In UP Elections

Prannoy Roy: The other important factor is economic non-caste factor. Many of them are so qualified but there is anger. Lack of job is a huge election in this election. Another factor that’ll affect the vote is OPS – the old pension scheme.

Shekhar Gupta: In summary, people are very unhappy with their fate. But they don’t necessarily see an alternative that will be better. For anybody to defeat the BJP now, they have to sell the idea that it was BJP’s mismanagement that they suffered so badly.

Prannoy Roy: When you’re looking out for results tomorrow, look out for the winner in this constituency. One constituency has voted the same party as UP – Kasganj.

UP Election: How Opposition May Just Have Helped The BJP

Focusing on UP’s 403 seats, a one percent swing in votes leads to 20 seats changing hands.

It is perhaps marginally easier to raise the IOU by 5 percent than to cause a swing in votes of one percent.

If the IOU doesn’t rise, the BJP can afford to lose as much as 7.5% of its vote.

A strong indicator of trends in the popularity of parties are Panchayat Elections.

The results of panchayat elections held in UP last year could be of concern for the BJP. 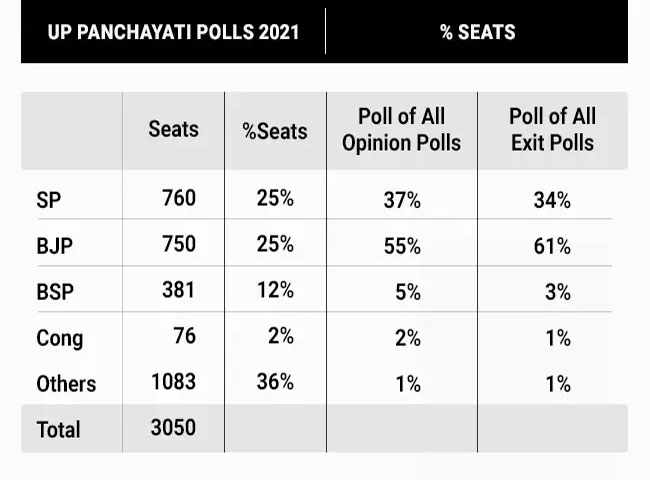 UP: Is BJP’s Victory Margin So Large That It Cannot Lose The Election?

Polls forecast that even though the BJP may lose 100 seats, it would still win with a clear majority.

The average margin of victory in all UP elections since 1997 is only just below this BJP landslide in 2017.

UP has seen the party in power voted out in every single election since 1996.

UP’s Missing Voters Could Give The BJP An Advantage

There has been a remarkably low turnout of male voters compared to women voters in the Eastern UP region in this election.

In these elections, the turnout of male voters in Eastern UP is almost 10% lower than women voters.

But in Central and Western UP, the turnout of male and female votes is approximately the same. 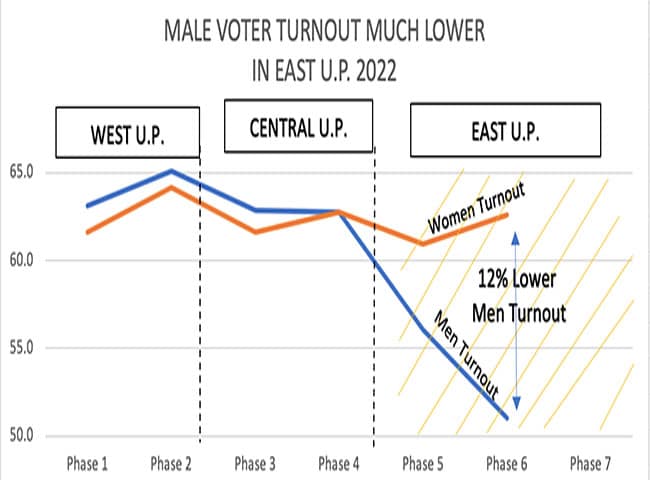