The Ram Ki Paidi by the Saryu river bank in Ayodhya was a sea of lights and colours after 9 lakh earthen lamps — “diyas” — came to life the evening before Diwali, creating a new Guinness world record of the largest display of oil lamps.

The light show, accompanied by firecrackers that lit up the sky and laser displays, was part of the Uttar Pradesh government’s Deepotsav celebrations. 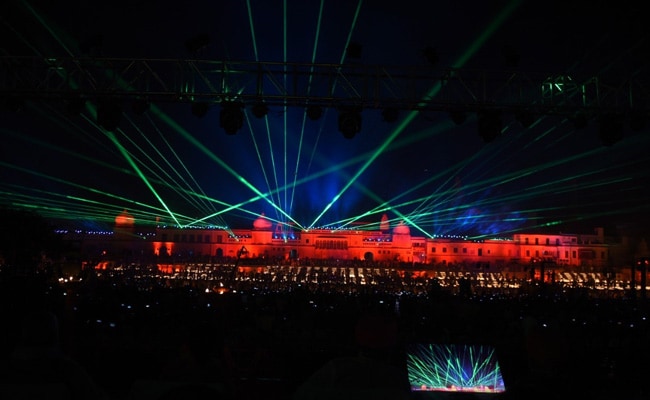 Three lakh more diyas were lit in the Ayodhya town where a grand Ram temple is being built following the Supreme Court’s 2019 verdict in the Ram Janmabhoomi – Babri Masjid case.

The state government set the 9 lakh diyas target this year after about 6 lakh diyas were lit in the last Deepotsav celebrations, also a Guinness glory feat. 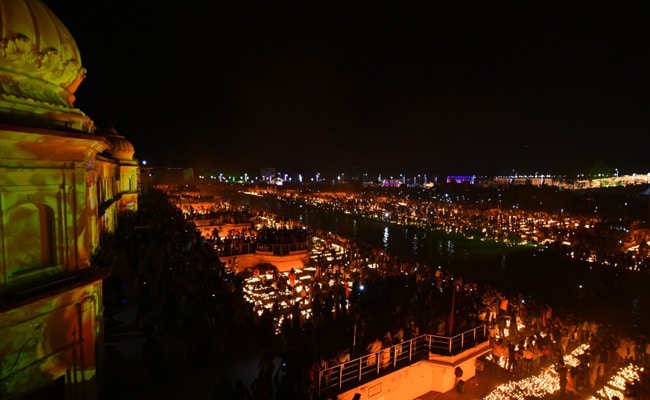 This is the fifth year of Deepotsav celebrations in Ayodhya by the Yogi Adityanath government and the last before the crucial Assembly polls early next year. “The effort is to wish for a better future for Ayodhya and the whole world,” District Magistrate Nitish Kumar had earlier said. 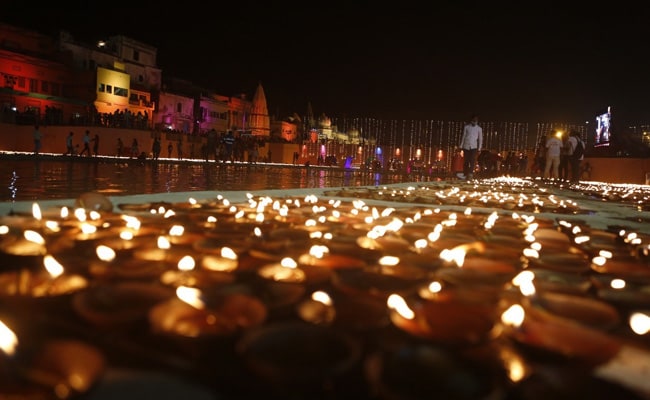 The laser shows, which added colours to the warm glow of the earthen diyas, depict chapters from the history of Ayodhya and have been on show daily for the past few days.

For the event, the administration made extensive security arrangements. Barricades have been put up to control the crowd and security personnel deployed in large numbers. 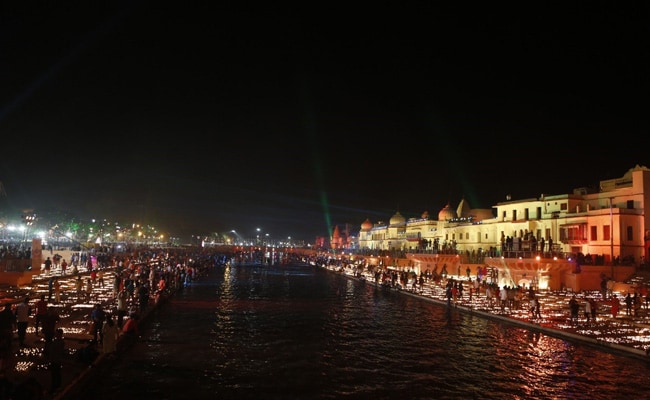 The temple town and the grand plans for it are at the centre of the ruling BJP’s political posturing ahead of the upcoming state polls and the 2024 general election, by which time the temple is expected to be ready.

Meanwhile, speaking at an event related to the Deepotsav celebrations, Mr Adityanath hit out at the Samajwadi Party, saying that chanting Jai Shri Ram and supporting the Ram temple was once considered a crime in the state. “31 years ago, bullets were fired at Rambhakts & Karsewaks in Ayodhya. Chanting Jai Shri Ram and voicing support for Ram Temple were considered a crime. But it is the power of the people & democracy that those who ordered firing on Rambhakts today bow to your power,” he said, referring to the 1990 Ayodhya firing incident when Mulayam Singh Yadav was the Chief Minister of Uttar Pradesh.

“Today it appears that if you continue like this, they and their entire family will line up for next Karsewa. When next Karsewa would happen, not bullets but flowers will be showered on devotees of Lord Rama & Lord Krishna. This is the power of democracy,” the Chief Minister added.

Asserting that the Ram temple will be complete by 2023, he said, “Earlier, state government used to spend money on the boundaries of ‘Kabristan’ but now money is spent on redevelopment and beautification of temples.”