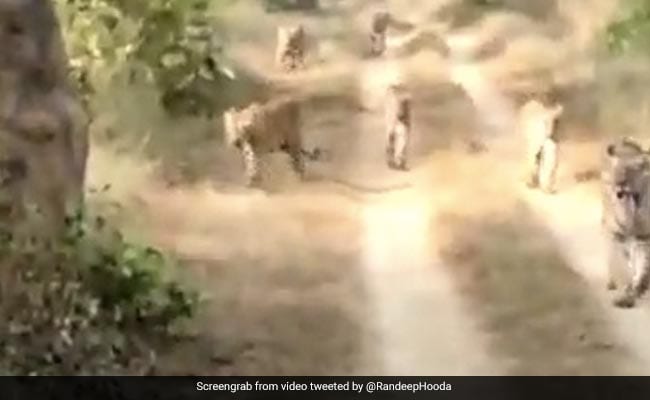 The rare sight of six tigers walking together has wowed the Internet. This morning, actor Randeep Hooda took to Twitter to share a video of a group of tigers walking down an unpaved road in a forest. The undated video was reportedly filmed at Umred-Karhandla Wildlife Sanctuary near Nagpur in Maharashtra.

In the video, two people off-camera can be heard talking as the tigers walk towards them. A few seconds into the clip, a vehicles approaches the big cats from behind. On spotting the vehicle, one of the tigers disappears into the forest, while others continue walking.

Tigers are solitary animals and do not form packs, which makes the sighting all the more special, as senior Indian Forest Service officer Ramesh Pandey pointed out in his response to the video.

“This is something really interesting happening,” he wrote on Twitter. However, while rare, sightings of tigers in groups are not unheard of. According to Mr Pandey, packs of five tigers have been spotted in the past in various parts of the country, but the sight of six tigers together is a “really incredible” one, he added.

“In the recent past we saw groups of 5 tigers in Panna, Pench and Dudhwa and now 6 tigers together is something really incredible,” the IFS officer wrote.

Other Twitter users were equally stunned by the clip, which has been viewed thousands of times on the microblogging platform.

Someone got immensely lucky today

wow wow wow! What a sighting, Hokam you got immensely lucky.

How do I go on this safari!!

Tigers are solitary by nature, with the exception of mothers and their cubs. While they do not form family units and adult tigers live largely solitary lives, they will socialise with other tigers when they come in contact with them.