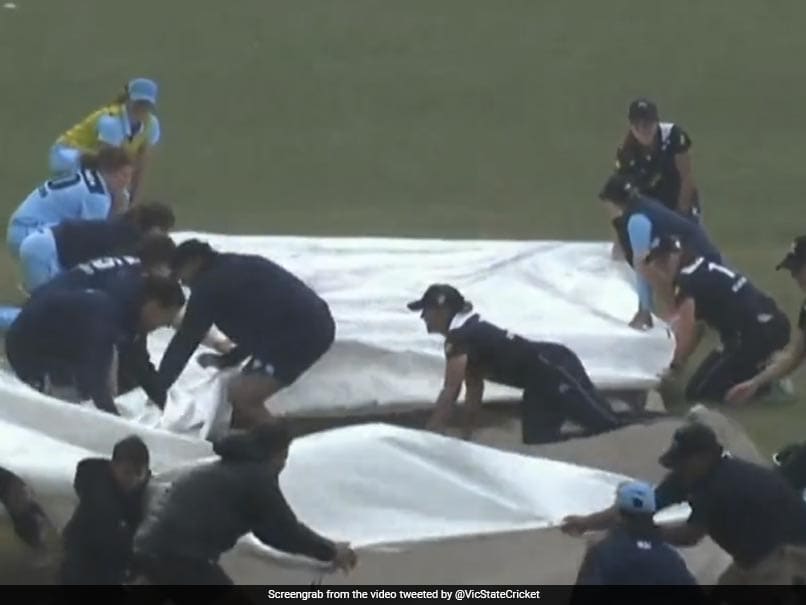 Watch: Victoria and NSW players help ground staff to get the covers on© Twitter

Chaos reigned supreme during a Women’s National Cricket League match between Victoria Women and New South Wales Women on Sunday as the Melbourne weather set in. With rain coming down at a fair pelt, the ground staff rushed to get the covers on but the windy conditions didn’t help their cause and kept blowing the covers away. The Victorian team led by captain Ellyse Perry and a few members of the New South Wales team came to the rescue of the ground staff. The players and ground staff then combined brilliantly to finally get the covers on but not without some difficulty.

The entire event made for some hilarious viewing with Perry having to lie down on the covers to prevent it from being blown off.

Absolute MAYHEM at the CitiPower Centre as the Melbourne weather sets in ?

Well done to players and ground staff on getting this cover down! ? #WNCL pic.twitter.com/e00U7hhQOp

Despite the unruly intervention of the rain gods, the entire match still took place.

New South Wales came out on top, coasting to a five-wicket win over Victoria Women.

NSW had won the toss, and elected to bowl. They started well, taking wickets at regular intervals as Victoria found themselves reeling at 120 for five in 25.1 overs. Annabel Sutherland and Nicole Faltum steadied the ship with a 77-run stand for sixth wicket.

Faltum smashed 88 not out off 83 balls to help her team post a fighting total of 270 for eight in their 50 overs.

The chase, though, proved to be a cakewalk for New South Wales as Rachael Haynes and captain Alyssa Healy got their team to a whirlwind start with 116-run partnership for the opening wicket.

Healy was dismissed for 51 while Haynes fell for a brilliant 96 off 119 balls. Tahlia Wilson and Phoebe Litchfield were both sent packing for ducks as Victoria threatened to derail NSW’s chase.

But a swashbuckling unbeaten 80 off just 48 balls from Erin Burns got NSW over the line with 41 balls remaining.