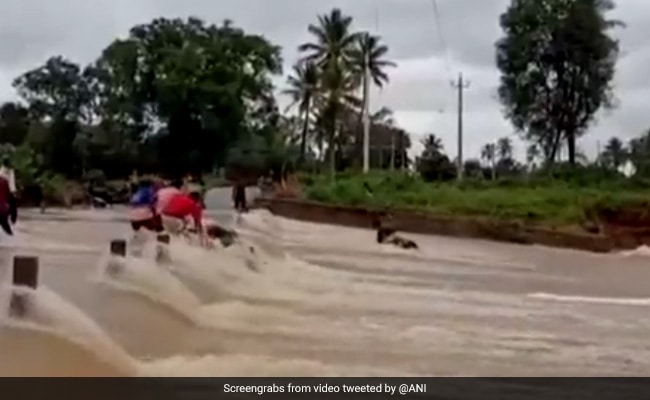 The man, along with his motorcycle, floats around for a bit but then safely emerges on the other side.

A biker had a narrow escape after he was swept away by strong currents on a flooded street in Karnataka’s Tumakuru, which is 70 km northwest of Bengaluru. There has been heavy rain in parts of Karnataka and more rain is forecast.

In a video, shared by News agency ANI, several people can be seen balancing themselves and holding out against the strong currents on the flooded Tumakuru road. Against the force of currents, a man is trying to pull in the biker but he slips away. The man, along with his motorcycle, floats around for a bit but then safely emerges on the other side.

In the 57-second clip, people are seen crossing the heavily flooded road with their two-wheelers. Another motorcycle can be seen being swept even as locals try to stop it.

#WATCH | Karnataka: A biker had a narrow escape after he swept away while crossing a flooded road in Tumakuru pic.twitter.com/qbNqefsBnD

The region has witnessed heavy rain over the last few days.

Thursday saw heavy rain in the capital city of Bengaluru. Schools in Bengaluru Urban and in some other districts in south interior Karnataka were closed due to heavy rainfall forecast.

Rain has caused disruptions in Tamil Nadu, Andhra Pradesh and Kerala as well.

(With inputs from ANI)