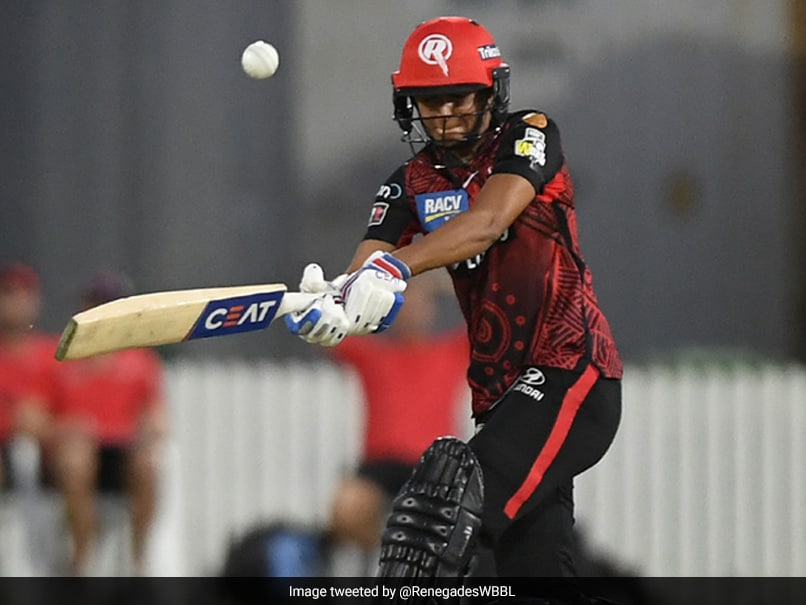 Harmanpreet Kaur in action in the Women’s Big Bash League

Indian women’s T20I team captain Harmanpreet Kaur produced a cracking knock in the ongoing Women’s Big Bash League in Australia for her team Melbourne Renegades Women, against the Sydney Thunder Women’s team on Wednesday. Harmanpreet came in to bat with her team in trouble after the loss of two quick wickets, including that of fellow Indian Jemimah Rodrigues. The veteran Indian batter stitched a good partnership with opener Eve Jones to steady the innings and then launched a vicious attack on Thunder’s bowler.

The attacking shots that she played reminded fans of her knock against Australia in the semi-final of the ICC Women’s World Cup in 2017.

Harmanpreet hit two massive sixes and 11 boundaries to stay unbeaten on 81 off just 55 deliveries. Her knock taking the Renegades to a massive total of 175/4.

Phoebe Litchfield gave it everything on the rope but it’s another six for Harmanpreet Kaur!

The Indian star was given good company by Jess Duffin, who scored 33 off 22 deliveries.

The Renegades have been in great form this season and a win in this match will help them reach the top spot in the points table.