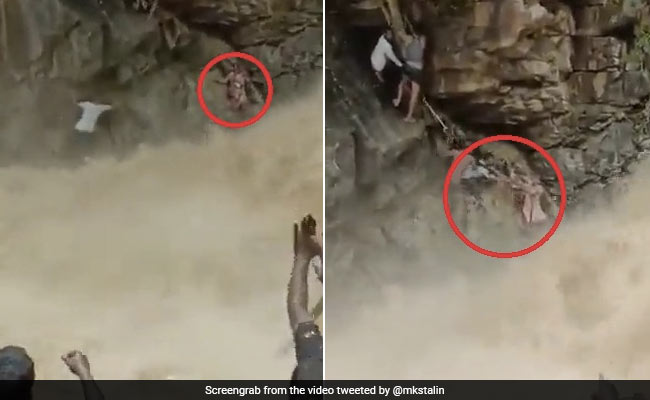 A woman and her child were rescued from flash floods at the Anaivari Muttal falls.

A daring operation to rescue a mother and child from a raging waterfall in Tamil Nadu has been widely-lauded on social media, including by the state’s chief minister MK Stalin. Footage that has gone viral on social media shows the woman balancing precariously on a rock while clutching her baby. In front of her, the gushing water of the Anaivari Muttal falls make it impossible for her to move. According to The News Minute, the Anaivari Muttal falls are a popular tourist destination in Salem district, but heavy rainfall can lead to flash floods in the area, which is what happened in the case of the woman and her child.

In the video, officials of the forest department were able to rescue the woman and her child by using a rope to reach them. On the other side of the waterfall, people were heard screaming as the officials climbed slippery rocks to rescue the duo. The officials were filmed carefully lifting the child and then helping the mother climb to safety with the help of the rope.

“The courageous act of those who saved the mother and daughter is commendable,” wrote Mr Stalin while sharing the footage on Twitter Tuesday. Watch it below:

While the mother and child made it to safety, two of the officials involved in the rescue suddenly lost their balance and fell into water. The video cuts off at this point, but according to several reports, the officials swam to the other side of the river safely.

“The Anaivari Muttal is a designated eco-tourism spot. Rainwater from the Kallavarayan hills comes down as a waterfall here,” Mr Gowtham explained. “This is the Attur region; if the rainfall happens in the Karmandurai region on the other side of this hill, people won’t know it from here. Within 20-30 minutes, the flash flood waters reached the area.

“It happens every year. This time, the water quantity was more. People were trapped on the side. There was no path, they could reach the other side only using a rope.

“Since our people had already been trained for such circumstances, they rescued the members of the public safely. We immediately vacated the people and ordered closure of the area,” he said.

The rescue operation has earned forest officials much praise and appreciation. Tamil Nadu chief minister MK Stalin also hailed the courage of the rescuers in his tweet.