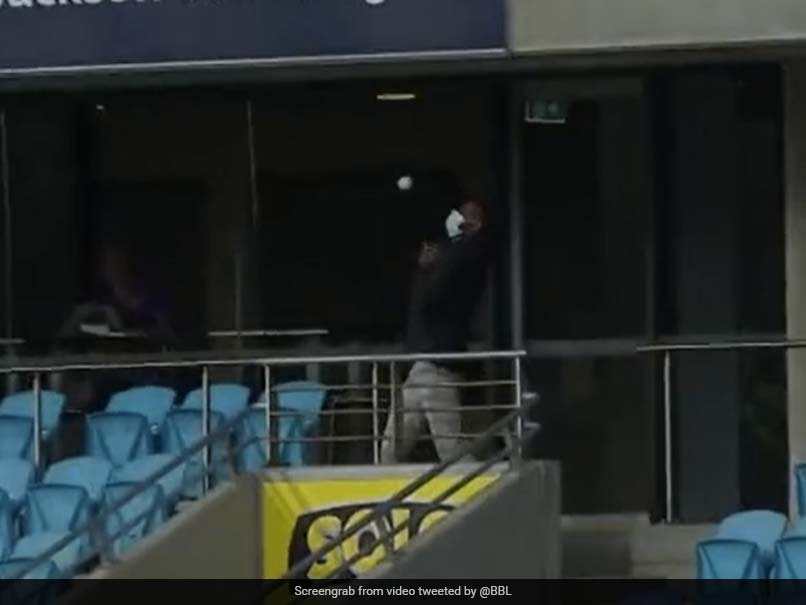 BBL: A spectator took a brilliant catch in the stands during a game in Hobart.© Twitter

One of the loudest cheers during the Hobart Hurricanes vs Perth Scorchers Big Bash League (BBL) match on Monday was reserved for one of the spectators, who took a brilliant catch in the stands. In the last over of the Scorchers’ innings, Hurricanes’ medium pacer Jordan Thompson bowled a low full toss to Ashton Agar. The left-hander went back and across and made good connection. The ball sailed way over the deep mid-wicket boundary and into the stands. A spectator in the stands judged the pace of the ball nicely, juggled once and then completed the catch, much to the delight of the crowd in Hobart.

Agar hit another six and a four in that over to collect 18 and help the Scorchers post 167 for 7 batting first, which proved to be a lot for the hosts, who kept on losing wickets from the beginning and could only manage 125 in their allotted 20 overs. Scorchers won the match by 42 runs.

Right-arm pacer Andrew Tye, who became the first bowler to pick 100 wickets for a particular side in BBL, finished with three for 19 in his four overs.

Agar, who had earlier played an important cameo with the bat, scoring 30 off 11 balls, ended with figures of 2 for 31 with ball.

The Player of the Match however went to Scorchers opener Kurtis Patterson. The left-hander smashed 78 off 48 balls, hitting six fours and five sixes to create the base of the Scorchers innings.

With this win, the three-time winners also went past defending champions Sydney Sixers to grab the top spot. Scorchers, who have won all of their four matches, now have 14 points. Sixers are at second place with 11 points followed by the Sydney Thunder, who have nine points in as many matches.