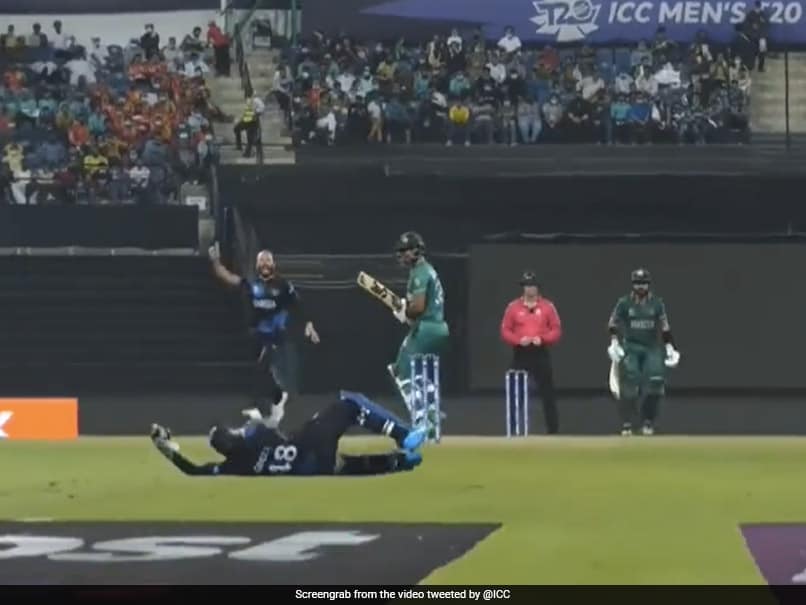 Pakistan beat Namibia by 45 runs in their fourth match of the T20 World Cup on Tuesday in Abu Dhabi. Batting first, Pakistan scored 189 runs with a superb batting show from Mohammad Rizwan (79 not out) and Babar Azam (70). The duo forged a 113-run opening stand that set the tone for the Group 2 table-toppers. Namibia too had something to cheer about during the Pakistani innings with wicketkeeper-batter Zane Green taking an excellent catch to dismiss Fakhar Zaman off Jan Frylinck’s delivery. Frylinck bowled a length ball that found the edge of Zaman’s bat. Green dived to his left side and took an acrobatic one-handed catch to dismiss the Pakistani left-hander.

ICC shared a video of the catch, captioning it, “Zane Green with a beauty of a catch. His acrobatic effort brings about the dismissal of Fakhar Zaman for 5.”

Chasing the target of 190 runs, Namibia scored 144 runs in their 20 overs. David Wiese top-scored for Namibia with his unbeaten 43-run knock. For Pakistan Hasan Ali, Imad Wasim, Haris Rauf, and Shadab Khan picked one wicket each.

With the win, Pakistan qualified for the semifinals, becoming the first team to reach the knockout stage of the ongoing tournament.

The Babar Azam-led side are still unbeaten in the tournament and top the Group 2 points table. The 2009 champions one more Super 12 match left, which will be against Scotland on November 7.