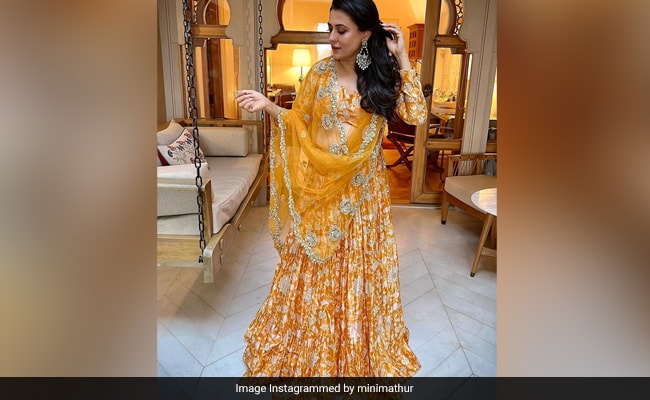 Now that Katrina Kaif and Vicky Kaushal have blessed our social media feeds with pictures from their dreamy wedding, guests who made it to the super-private ceremony have been sharing posts too. Two of Katrina Kaif’s closest friends in the industry, Yasmin Karachiwala and Mini Mathur were present at the beautiful wedding in Rajasthan. Both Yasmin Karachiwala and Mini Mathur were dressed in traditional Indian ensembles for the wedding festivities. Ranging from sarees to kaftans, both of them made sure that the fashion quotient among the bridesmaids was as high as it can get.

Now, let’s just back to the outfits. Mini Mathur went with a mustard yellow lehenga for the mehendi. It was paired with a full-sleeve printed blouse and a matching dupatta. For earrings, she borrowed a pair of statement silver chandbalis from actor-best friend Shruti Seth.  “I absolutely love the celebratory and anticipatory energy of a mehendi evening… The bride’s exasperation at having to sit it out while hours of intricate designs get printed on her hands…. Her beau and friends feeding her bites between cheering others on…” an excerpt from Mini Mathur’s caption reads.

Mini Mathur followed this up with a lovely white and gold saree for the haldi ceremony, which she paired with gold jewellery. She had her hair tied in a bun. “I love the naughty yet serene ambience of the Haldi ceremony – that has the power to purify, cleanse and enhance the bride’s beauty and also ward off bad energy. The scent of mogra and roses…with everyone dressed in crisp, pristine white and gold…my favourite colours!” Mini Mathur wrote in the caption.

Sharing a picture from the Katrina Kaif and Vicky Kaushal’s sangeet ceremony, Mini Mathur wrote, “The Sangeet. The shimmer. The shine. The dancing. The roasting. The magic.” And this is just what she embodied through her black and silver saree, with emerald earrings that she chose for the occasion.

Yasmin Karachiwala, meanwhile, went with a sheer pale pink saree and statement jewellery for the wedding. She tied her hair in a bun with some floral ornamentation. “Wedding shenanigans,” she said in the caption.

For mehendi, Yasmin Karachiwala went with a mint green lehenga, with diamond and emerald earrings. In the caption, she said, “Mehendi rang layengi.”

For Katrina Kaif’s haldi ceremony, Yasmin Karachiwala chose to go with a kaftan top and sharara pants in ivory and gold. In the caption, Yasmin wrote, “Haldi ceremony is a fun-filled riot! As you apply haldi/turmeric to the bride to enhance her complexion, you have to make sure not to get any on your cream and gold outfit!”

Tell us whose wedding looks you resonated with more in the comments.