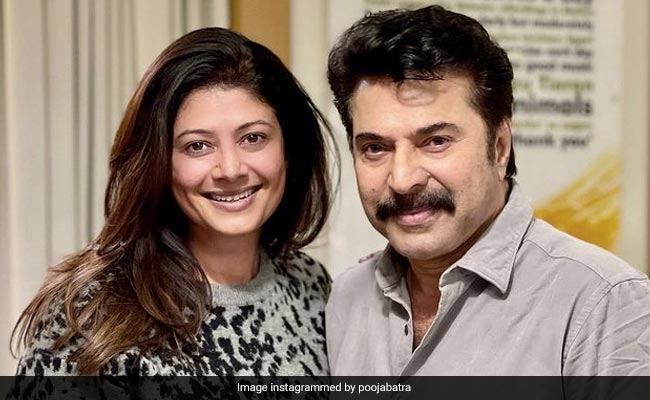 Pooja Batra has something special in store for all Megham fans out there. Hint: It has something to do with Mammothy, her co-star in the 1999 Priyadarshan directorial. Pooja Batra recently met the South star in Hungary and shared some pictures on Instagram. Here, the two stars are seen smiling at the camera. To make this post a memorable one, the actress wrote, “All the Megham fans in the house. With one of my favourite co-stars, Mammothy. So nice to see you after so long. You have not changed a smidge.”  Pooja Batra’s husband, actor Nawab Shah was the first one to come with a comment. He shared a raising hand and red heart emoji. Fans also made a bee-line to share their excitement. “Classic combo,” wrote one. Another wrote, “Our megastar.” Some also dropped red heart emojis.  Pooja Batra and Mammothy played on-screen husband and wife in the film.

Pooja Batra is currently spending some quality time with her husband in Hungary. Seems like the actress jetted off to celebrate her birthday, which was on October 27. And, we can’t complain here as she is keeping us posted by sharing snippets of her travel diaries on Instagram. Now, we have this beautiful postcard featuring the couple waiting for you. Her caption goes like this, “Home is where Hubby is.”

In another post, Pooja Batra also thanked all her fans and well-wishers for sending greeting on her birthday. “Thank you all for my birthday wishes. Albeit they started rolling out a week ago leading up to the 27th. So humbled and grateful to see the love from everyone,” she wrote.

Pooja Batra is known for her work in films including Virasat, Nayak, Chandralekha. The actress tied the knot with Nawab Shah in 2019.