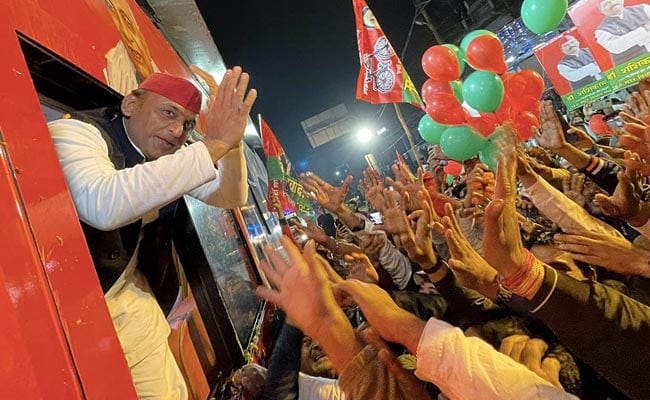 Akhilesh Yadav, campaigning for the Uttar Pradesh election, took swipes at the ruling BJP today over Prime Minister Narendra Modi’s rallies at government-hosted events and over the killing of farmers at Lakhimpur Kheri in which a Union Minister’s son is the main accused.

The Samajwadi Party chief and former Chief Minister also suggested that the tax raids on his aide and other party leader on Saturday were politically driven.

“There are many questions over the junior Home Minister,” Akhilesh Yadav said, referring to minister Ajay Mishra Teni, whose son Ashish Mishra is accused of running over farmers at Lakhimpur Kheri on October 3.

The minister clings to his job amid opposition calls for his removal and the BJP’s rising discomfort over keeping him on in the run-up to the UP election.

Akhilesh Yadav reminded Chief Minister Yogi Adityanath of his boast about “running bulldozers” over properties of criminals in Uttar Pradesh.

“Agar bulldozer chalna chahiye …when is the government going to use a bulldozer in Lakhimpur? It is the BJP that is shielding criminals in UP,” said the Samajwadi party leader, still smarting at being called a terror sympathiser at a rally.

Mr Yadav also took shots at PM Modi’s grand events in UP and his campaign-like speeches from these events.

“This is a historic programme. The ground is full. People have come on their own. These are the common people. The BJP’s rallies are not of the people, they are ‘sarkaari’ (government) rallies. There is a rally in Prayagraj. I have heard government buses have taken women from Mainpuri to Prayagraj. I am happy this is a rally in Mainpuri with people from here only. This rally proves that the BJP will see a historic defeat,” he said.

The former Chief Minister also accused the BJP of targeting his aides and colleagues with tax raids in order to break him before the polls. He linked it to his announcement of a reunion with his uncle Shivpal Yadav, the younger brother of Mulayam Singh Yadav, who had quit the party.

“The moment I took ‘chacha’s ‘ (Reference to Shivpal Yadav) party together, the many wings of the BJP , the IT wing, the CBI wing and the Enforcement Directorate wing, as the BJP faces defeat, more such wings from Delhi will come to UP . Please remember ‘jo dar gaya so mar gaya (whoever is afraid, loses),” Mr Yadav said.