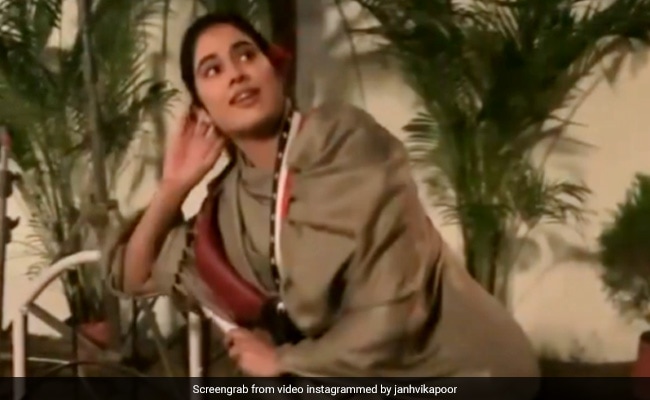 Janhvi Kapoor in a still from the video. (courtesy: janhvikapoor)

We all know that Janhvi Kapoor has a graceful and gorgeous personality. But did you know that the stunning actress is also a goofball? Well, we have proof of just how fun-loving Janhvi is, straight from the sets of her upcoming film Mili. The actress, who clearly loves her job, shared a bunch of photos and videos that are hilarious, to say the least. In the first clip that has sent the Internet into a meltdown, Janhvi is seen doing some eccentric things. This includes wearing a fanny pack over her neck and striking a funny post, jumping with two bags hung over her neck and wearing a mask over her head as a hairband among other things.

As the actress performs one funny act after another, you cannot but help but fall in love with Janhvi Kapoor. In another image, she is with actor Sunny Kaushal. Next, Janhvi is playing with a flower. And then, she is balancing on a couch with her legs and hands outstretched screaming, “I am a starfish.”

While fans and followers could not stop laughing and cheering on this fun-loving version of the actress, Janhvi Kapoor’s sister Khushi Kapoor had a typical sister reaction. She wrote, “Why are we related? I’m scared.”

On Monday, Janhvi Kapoor had the Internet swooning over her travel pictures with fellow actress, Sara Ali Khan. Both Sara and Janhvi love to travel and the duo visited Kedarnath together. The images shared by Janhvi reveal that they visited shrines together and spent a lot of time in the lap of nature. For the caption, Janhvi Kapoor dropped mountain, Sun, Moon, heart and meditation emojis.

Sara Ali Khan, who began her career with the film titled Kedarnath, also shared snapshots and wrote, “Back to where it all begun.”

Meanwhile, Janhvi Kapoor has been treating her fans to images from her vacation for quite some time, now. In the pictures, the actress is surrounded by mountains, trees and the Sun. Sharing the post, Janhvi wrote, “Keep me where the light is.”

On another occasion, Janhvi Kapoor shared moments from an outdoor trip with friends. This time too, the actress is surrounded by scenic locations. “Somewhere over the rainbow,” read her caption.

Janhvi Kapoor made her debut with Dhadak in 2018. She is known for her work in Ghost Stories, Roohi and Gunjan Saxena: The Kargil Girl. In addition to Mili, which is a remake of the Malayalam film Helen, Janhvi Kapoor will be seen in Good Luck Jerry and Dostana 2.