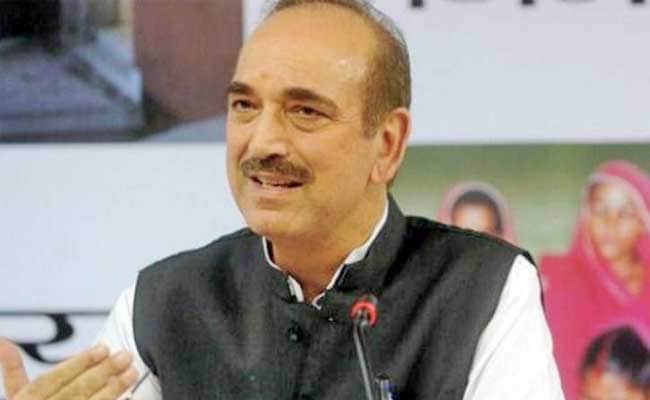 Ghulam Nabi Azad denied that he had knowledge of resignations of the state Congress leaders. (File)

Denying that he had knowledge of resignations of some state Congress leaders close to him, former Chief Minister Ghulam Nabi Azad said he will do what the people of Jammu and Kashmir want him to do for the betterment of the Union territory.

Spelling trouble for the Congress in Jammu and Kashmir, four former ministers and three ex-legislators, loyal to the group of Mr Azad, resigned from party posts, saying they have not been provided an opportunity to be heard on party affairs in the union territory, sources said on Wednesday.

“I will do what the people of Jammu and Kashmir want me to do for the betterment of this state,” Mr Azad told reporters in reply to a question on whether he would contest as Congress chief ministerial candidate in the next assembly elections keeping in view the demand raised at a public rally in Kathua district.

The leaders, who shared stage with Mr Azad at the rally and resigned from their posts in the Congress, saying only Azad is acceptable to them as the party’s face in Jammu and Kashmir as well as the chief ministerial candidate, not state Congress chief Gulam Ahmed Mir.

“Mir is not acceptable to us. We want Azad sahib and he should lead the party. He has sacrificed a lot for the party and this area,” former minister Manohar Lal Sharma, who was among the leaders who resigned from party post, said at the Azad-led rally in Kathua.

Mr Azad said he came to know about the resignations of Congress leaders only through newspapers today.

“I am not party to that (resignation by party leaders). I was not consulted. I, myself, read it in the newspapers,” he said.

The veteran leader said that he did not talk to them as it is their personal point of view.

On the issue of grievances raised by his loyals in the state Congress, Mr Azad said, “There have been grievances.”

Asked about the show of strength of his loyals in Jammu and Kashmir, he said this was not a ‘shakti pradarshan‘.

“I travel to internal areas of Jammu and Kashmir. For long it had not been possible because of the state’s bifurcation and then due to the COVID-19 pandemic. This is just to know about the people.”