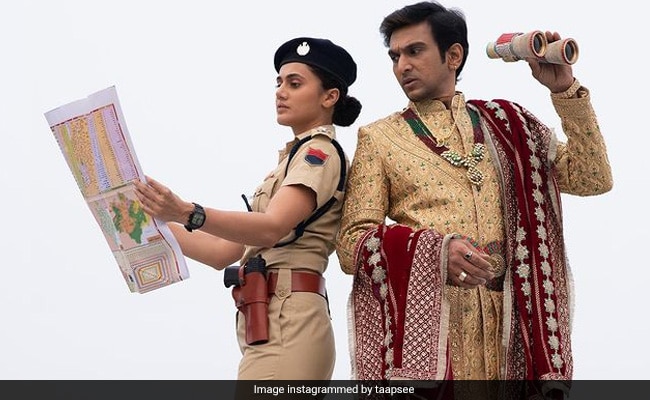 What can one expect when two powerhouse performers like Taapsee Pannu and Pratik Gandhi come together? A whole lot of laughter and drama, apparently. This is what the actors are promising in their upcoming film, Woh Ladki Hai Kahaan. The first look of the film, which has been described as a comedy-drama, has been shared by the lead actors on social media. In the image shared by the actors, Taapsee Pannu is seen in the garb of a police officer with a map in hand. Next to her is Pratik Gandhi who is dressed in a typical groom’s outfit with a pair of binoculars. And what brings a cop and groom together? A missing bride, the caption declares.

Unveiling the first look, Taapese Pannu wrote, “Pratik Gandhi and I are all set to find his missing bride in Junglee Pictures and Roy Kapur Films’ next comedy-drama Woh Ladki Hai Kahaan? Here’s the First Look!”

Pratik Gandhi, too, shared the same picture on his Instagram with a similar caption. Reacting to the post, Shreya Dhanwanthary, who acted with Pratik Gandhi in the hit series Scam 1992 responded with a fire emoji.

When the film was announced earlier this year, the title of the movie grabbed people’s attention given that it is also the title of a song from Dil Chahta Hai. The iconic song featuring Saif Ali Khan and Sonali Kulkarni became an instant hit with fans making the lyrics Woh Ladki Hai Kahaan famous across the country.

In fact, Siddharth Roy Kapur, who is producing the film had even thanked Farhan Akhtar and Ritesh Siddhwani for allowing the team to use the title of the song for their film. In a statement, he said, “I’d like to thank my friends Farhan and Ritesh for so graciously permitting us to use as our title the name of their song from the iconic Dil Chahta Hai, that so perfectly captures the theme of our film!”

Meanwhile, Pratik Gandhi will soon also be seen in a yet to be titled film with Vidya Balan. Incidentally, Vidya Balan is married to producer Siddharth Roy Kapur. The film will also feature Sendhil Ramamurthy and Ileana D’Cruz in lead roles.

Taapsee Pannu, on the other hand, has wrapped up the shoot of her film, Shabaash Mithu, which is the biopic of ace Indian cricketer Mithali Raj. In addition to this, she will also be seen in Looop Lapeta, Dobaaraa and Blurr.

Woh Ladki Hai Kahaan marks Taapsee Pannu and Pratik Gandhi’s first on-screen collaboration. The film is written and directed by Arshad Syed. He has previously worked as a director on Student of the Year 2 and the television series Adalat.