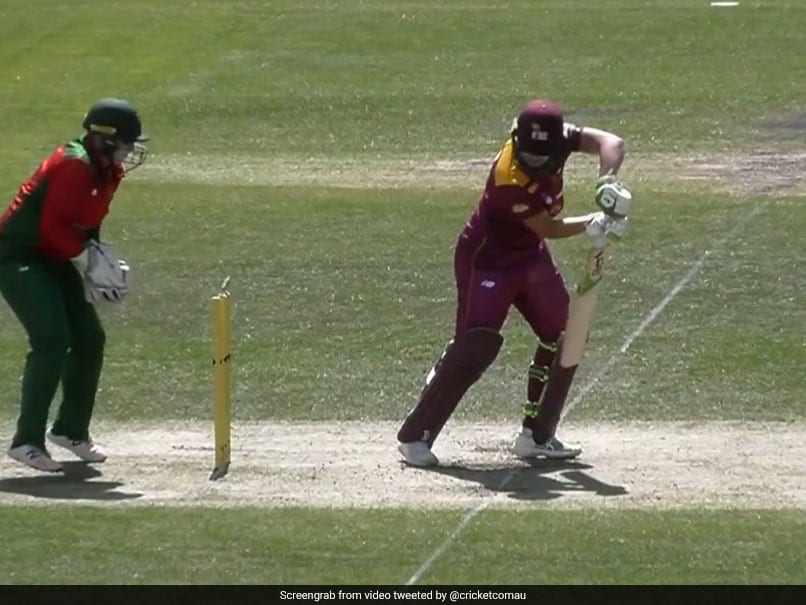 The ball brushed the top of off-stump but no one from the opposition appealed.© Twitter

In one of the most bizarre incidents to have taken place on a cricket field, a batter continued to play on despite being bowled by the bowler with the umpires getting it all wrong. During a game between Queensland Fire and Tasmanian Women Tigers in the Women’s National Cricket League in Australia, Queensland batter Georgia Voll was bowled as the bail on off-stump was dismantled after the ball missed the outside edge of the bat. However, the opposition didn’t really appeal and the umpires too failed to see what had transpired.

Even the commentators were mystified, thinking that the keeper’s gloves might have dislodged the bail while the batter stood nonchalantly as if it was just a play and a miss.

ICYMI: An odd moment in the #WNCL yesterday after replays showed Belinda Vakarewa bowled Queensland opener Georgia Voll on 26, but no one appealed! pic.twitter.com/b8w2NXIEIW

However, this blunder didn’t prove to be costly as Sarah Coyte removed Voll for 31 runs. Coyte ended the match with figures of 3/40 in nine overs.

In reply, Nicola Carey scored a marvelous unbeaten century to guide her team past the target of 232 runs (DLS Method).

After her superb spell of 2/46 in 10 overs, Heather Graham proved to be a fantastic partner to Carey with the bat.

Graham showcased great application in her batting as she went on to score a well calculated half-century and guided the team to a five-wicket win.