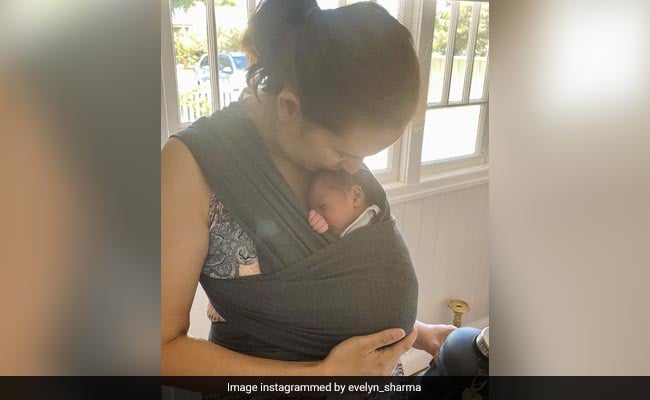 Actress Evelyn Sharma’s latest Instagram post calls for congratulations. On Friday, Evelyn revealed that she has become a mother. Sharing a picture from her maternity diaries, Evelyn Sharma posted a picture with her baby girl, who she has named Ava. Evelyn, sharing the precious picture with her baby girl Ava, wrote in her caption: “The most important role of my life. Mommy to Ava Bhindi.” The comments section of Evelyn’s post was filled up with congratulatory messages from her Instafam. “Congratulations Evelyn,” wrote actress Sonal Chauhan. Elli Avrram added, “My angel! Ava. So, so happy for you my Ev and you’re such a pretty mommy.”

The actress got married earlier this year. She wrote sharing the picture: “Forever.” She looked stunning in a lace wedding gown while Tushaan complemented her in a blue suit. The couple had earlier planned a big fat Indian wedding. However, they opted for a low-key ceremony at country side setting in Brisbane due to the pandemic.

Evelyn Sharma announced her engagement to Tushaan Bhindi in 2019 with a perfect post. She loved-up photo from Sydney and she captioned the post: “Yes!” The couple could be seen kissing on a yatch in the dreamy picture. This is what we are talking about:

Evelyn Sharma stepped into Bollywood debut with 2012 film From Sydney With Love and she went on to feature in movies like Nautanki Saala, Issaq, Main Tera Hero and Yaariyan. She also made brief appearances in films like Yeh Jawaani Hai Deewani, Yaariyan, Jab Harry Met Sejal and Kuch Kuch Locha Hai. She was last seen in Saaho, featuring Prabhas and Shraddha Kapoor in the lead roles.