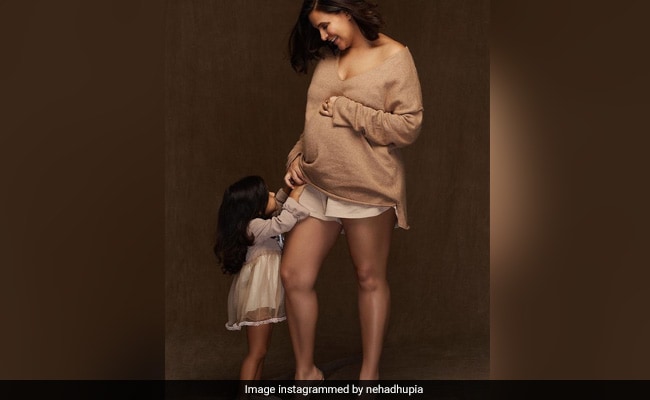 Neha Dhupia and Angad Bedi’s daughter Mehr turned three today. On her little daughter’s birthday, Neha Dhupia wished her in the most special way on social media. Neha Dhupia posted a picture from her maternity photoshoot and wrote: “At 11.25 am, three years ago on this day … my heart started beating outside my body …our baby girl you taught us what love is. Happy birthday our little unicorn. Mama has fallen short of words… (which never happens).” Mehr was born on November 18 in 2018; Neha Dhupia and Angad Bedi welcomed their second child on October 3 this year.

Angad Bedi shared a super cute video featuring Mehr and wrote: “You make me want to be a better person each day. My love for you I cannot express… my heart is filled with gratitude. Thank you to the almighty.. to the universe and your lovely mother for bringing you into this world. And you choosing us as your parents. I love you my lifeline Mehr. Spread your laughter wherever you go. Waheguru bless you now and forever. MEHR #happybirthday.”

On Halloween, Neha Dhupia shared a couple of family photos featuring herself, Angad Bedi, their little son and Mehr. Take a look:

Neha Dhupia has worked in several films like Singh Is Kinng, Tumhari Sulu, Hindi Medium and Lust Stories. She was last seen in Priyanka Banerjee’s short film Devi, in which she co-starred with Kajol, Shruti Haasan, Neena Kulkarni and Shivani Raghuvanshi.

Angad Bedi was last seen in a music video titled Baithe Baithe. His last film is Gunjan Saxena: The Kargil Girl, in which he starred alongside Janhvi Kapoor. Before that, he starred in web-series The Verdict – State Vs Nanavati.