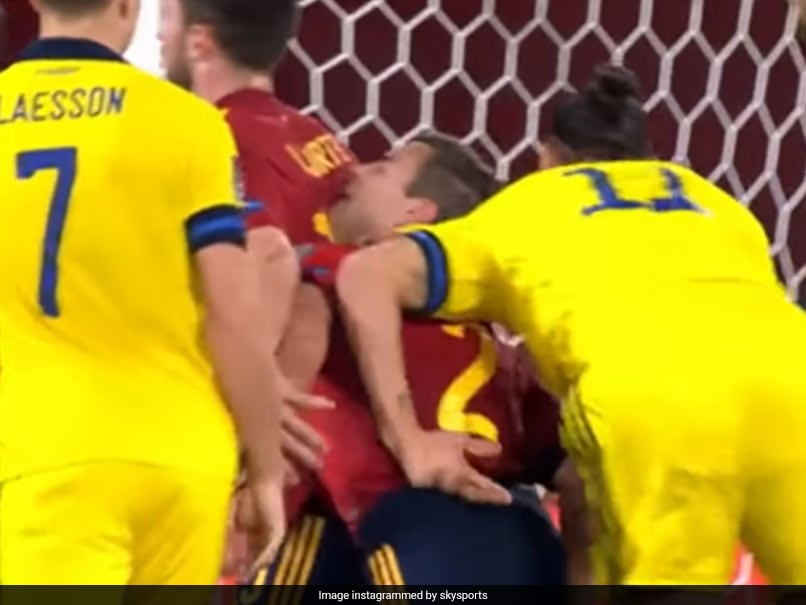 Zlatan Ibrahimovic somehow escaped getting sent-off during Sweden’s World Cup qualifier against Spain despite a brutal shoulder barge on full-back Cesar Azpilicueta. The AC Milan striker came on as a late substitute at the Estadio de La Cartuja with the game at 0-0 and Sweden needing a goal to pip their hosts to automatic qualification. However, Juventus striker Alvaro Morata netted in the 86th minute to send Spain to Qatar while Sweden will have to go through play-offs to join them.

The incident took place during the stoppage time, when a corner was swung into the Spanish penalty area. The 40-year-old smashed into the back of the Chelsea skipper, who immediately hit the floor in some pain.

The Spanish players were quick to surround the German referee Felix Brych in an attempt to get Ibrahimovic sent off. Spain, however, had the laugh last as Sweden left Seville empty handed.

Also, Ibrahimovic received a yellow card, which none of the cameras caught, and as a result, he will miss Sweden’s first-leg of the play-offs in March.

Spain, with their win over Sweden in Group B, joined the likes of Croatia, France, Belgium, Denmark, Germany and Serbia, who defeated a Cristiano Ronaldo-led Portugal 2-1 away from home, to seal a place in next year’s World Cup as group leaders. Sweden and Portugal will now have to go through play-offs to join them.

The fate of teams like Italy, England, Netherlands, among other will be decided in the days to come.